Previously I discussed why the formal launch of the website was delayed. Today I'd like to say that we are fairly confident in getting the site launched by the end of the month, in time for Phillies spring training baseball in early March.
We are setting the date for the formal launch for March 1. You can join the Facebook event and group to help spread the word.
Posted by Unknown at 5:59 AM No comments:

When we started to plan for the launch of the new and improved Macho Row we had toyed with the idea of launching on February 1. As you can tell by the calendar, that has not happened.
The design of the website is behind schedule but it is hopeful that the delay will be worth the wait. We have an artist from the animated television show Archer designing the site's banner, which is a reason for the delay as the show's staff are wrapping up this season's shows.
Whenever things get back on track we will follow up with the latest on the development blog. We still plan to be in full swing by spring training and continue to work hard behind the scenes to have the site ready to go soon enough.
Thank you for your patience and understanding.
Posted by Unknown at 12:22 PM No comments:

As the site begins to come together Macho Row is open and ready to work with potential advertisers now. A pre-launch advertising package with rates for 2012 is now available upon request.
Macho Row will welcome advertisers to take advantage of graphic and text ads, as well as explore opportunities for sponsored posts at competitive prices open for negotiation. As a reward for early advertisers, any advertising deal locked up before the formal launch of the website will receive a 10% discount on the total package desired.
If interested in our advertising package, please submit an email request. Some advertising space is available on a limited basis.
Posted by Unknown at 5:15 AM No comments:

Starting today the work to build a new and improved Macho Row website has begun. In partnership with Bloguin, Macho Row will become the network's website devoted to covering the Philadelphia Phillies.
The following steps have been completed:
In addition, a target date for launching the site has been set up. The hope is to have a full launch of the site on Wednesday, February 1, 2012. That is only a short time away of course but it would allow for full spring training coverage and allow for adjustments to be made well ahead of the start of the 2012 baseball season.
As some already know, Macho Row already has a Twitter account. This account will continue to be used for Phillies coverage and will see more activity moving forward, effective immediately. Follow Macho Row on Twitter @Macho_Row.
In addition, a Facebook page is already set up for the site and will begin to see more updates effective immediately. Like Macho Row on Facebook.
UPDATE: Macho Row is now officially on Google+ as well. Add the site to your Phillies and Philly Sports oriented circles as you desire. Stay tuned for future scheduled hangouts. Add Macho Row on Google+.
Posted by Unknown at 4:42 AM 1 comment: 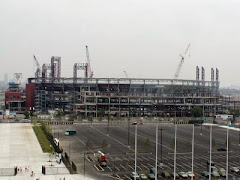 New home for Phillies coverage is under construction.